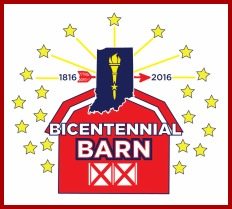 The Knigga Hay Press Barn was selected as a Top 10 Indiana Bicentennial Barn!  Only ten barns were chosen from among the more than 200 barns that were entered. Read more about this prestigious award by visiting http://www.200indianabarns.com/top-10-barns–honorable-mentions.html 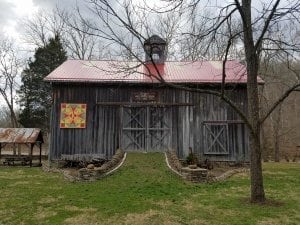 In 2003, I had been looking for a log house and ran across a fellow who knew of a hay press barn. Even though it didn’t spark my interest at the time, I decided to go ahead and take a look at it. All I could think was “WOW”! I was definitely intrigued and took some pictures. Later, when I showed the pictures to other people, it seemed as if they had never seen such a thing. This proved to me that not only was the structure unique in character, but was also rare, which only made me more interested.

The barn was located on Pleasant Ridge in Ohio County, about 10 minutes from my family’s farm. A man from Ohio named Jack Wetterick, owned the 80-acre property where the barn was located. He purchased the property as an investment and was interested in selling the dilapidated barn because it sat on a ridge where potential development could eventually occur. Soon we negotiated a deal which included cleaning up the site, and the barn was mine!

It took approximately 2 weeks to take the structure down, including the stone foundation. Knowing that it would help with the rebuilding process, we tagged every piece…all 300+ and took many photos and video. I stored the barn for nearly 2 years before I had a reconstruction plan and the exact location was determined. Groundbreaking started in the fall of 2006.  During the winter months, Mother Nature didn’t make the process any easier. By the spring of 2007, the structure was 90% complete.

I still continue to add and tweak small details with the barn every time I am at the farm. Now, I am working on a layout for an entire village that I plan on building someday. I am always collecting and looking for props to add that will create an authentic environment for that historic time period.

HOW THE HAY PRESS WORKS 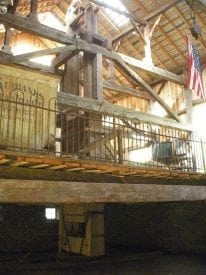 A hay press is a three-story stationary hay bailing mechanism called the Hewitt, Beater and Mormon Press. It was invented by Samuel Hewitt of Switzerland County, Indiana in 1843 to be an improvement over other presses at the time. To operate the press, it took 2-3 attendants and a mule or horse. It would take approximately 10-15 minutes to make each 300-lb. bale. The bales were made to ship on the Ohio River to growing urban areas where hay was not readily available.